World
A historic blizzard of the US North- Eastern Coast

To the admiration of the residents of New York City, the country was sparred of a blizzard that swept through the North-eastern coast of US. Many areas however, were severely hit by the storm leaving up to 2ft heap of snow across Long Island and other areas of New England including Nantucket which was severely affected.

Warnings from the National Weather Service (NWS) identified a number of places including the Eastern Maine, Rhode Island, Massachusetts and New Hampshire, as places most likely to be affected by the heavy snowfall until Tuesday evening. The northern states of Rhode Island and New Hampshire embarked on an unusual emergency action by closing down their state offices. 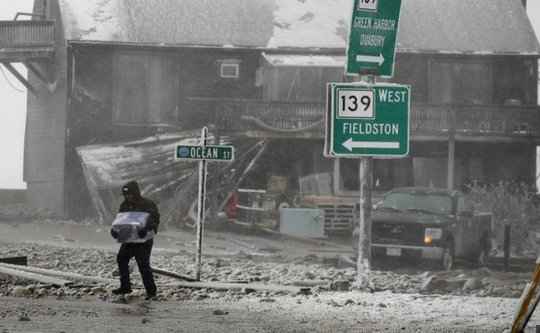 “I think you could call it a historic event,” the governor of Massachusetts Charlie Baker had stated in an evening press conference.

Predictions from NWS indicate New England is likely to experience another eight inches of snow heap from the heavy storm before charting its course towards the north-east to affect Nova Scotia in Canada. Areas around the coast are expected to experience some flooding and the wind gusts reaching an approximate of 65mph in other areas.

A lot of the residents in Nantucket which was badly hit by the storm experienced power outage on Tuesday afternoon. Strong winds which swept through the city recorded up to 78mph between the night of Monday and the morning of Tuesday; though it is uncertain the number of homes that have been damaged by the massive storm. Electricity was being restored back to the island on Tuesday evening.

A travel ban which has been placed on roads within the eastern and northern parts of the state of Massachusetts will hold until midnight. A great number of educational institutions in the affected areas still remained closed and placed under a state of emergency.

Over 7,700 flights were cancelled and travel bans placed on states close to the north-eastern coast. Prominent among them were the whole of New Jersey, Connecticut and other thirteen counties in New York but were later revoked, when the expected magnitude of storm which was later to hit those areas was rather extremely low.

Andrew Cuomo, governor of the New York who was later to defend his decision for the close down of the city’s subway system had this to say during a press conference on Tuesday morning. “I think the decision to err on the side of caution, especially given the information that we had at the time, has put us in a position where the system will come online faster this morning.”

The area of Long Island in New York was the most affected with predictions from forecasters indicating that Suffolk and western Nassau could still experience a snowfall of up to 30 inches.