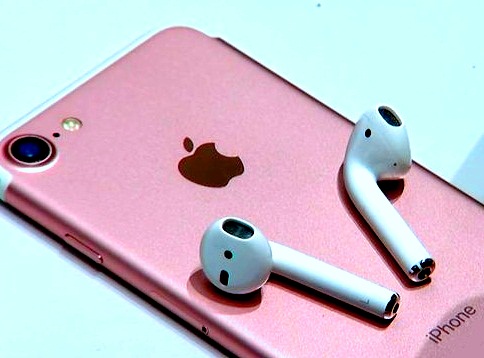 The newly launched iPhone 7 is without a traditional headphone socket. Instead, its lightning connector would make room for other components. Traditional  earphones are replaced by a wireless Airpods.

The Airpods contain infrared sensors to detect when they are in the user’s ears. This allows users to automatically stop music when they are taken out. However, users will have to get used to charging another device.

According to Apple, the Airpods will run up to five hours on a charge. It comes with a recharging case that can extend their life up to 24 hours before a plug socket is required.

Apart from this, new iPhone 7 has features like; the home that button can now detect how firmly it is being pressed and provide vibration-based feedback. The handsets can be submerged in water up to depths of 1m for 30 minutes at a time. The larger iPhone 7 Plus model gets a two-lens camera on its rear, allowing it to offer a choice of focal lengths

Another change is the introduction of stereo speakers, one at each end of the handset which could deliver twice the volume of the iPhone 6S. The iPhone 7 ranges from £599 to £799, depending on the amount of storage. The iPhone 7 Plus ranges from £719 to £919. They will be  available to buy from 16 September.