Whether by sheer coincidence or through careful planning, they welcomed their 10 millionth passenger just when its newly upgraded airport was unveiled on 31st January. The airline deems this milestone worth celebrating after just three years of operation.

The 10 millionth passenger who flew on VJ270 flight from Ho Chi Minh City to Vinh, a Korean business woman Ms. Kang Jeong Hee is the lucky passenger to enjoy complimentary flights within a whole year with Vietjet.

An event organized to mark the occasion had delegates from the Ministry of Transport of Vietnam, Airports Corporation of Vietnam, and Nghe An province’s authorities attending. 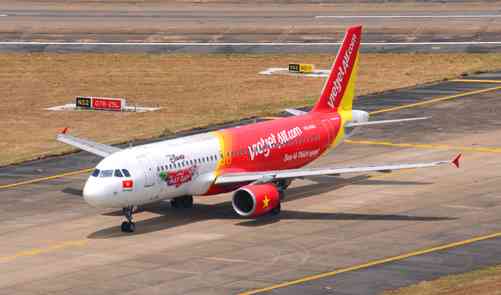 Vietjet is running a daily promotion on its international and domestic routes to celebrate this great milestone achievement.

“I feel so lucky to be Vietjet’s ten millionth passenger!” said Ms. Kang Jeong Hee. “I chose to fly with this airline as I read about the airline’s new and modern aircraft, reasonable prices, and flexible flight schedules.

As Vietjet is now expanding its flight network across Vietnam and the region, especially to major destinations in South Korea, I will book all my business and tourism flights with Vietjet. I look forward to the airline’s further development so it can offer more incredible flying opportunities to everyone.”

Mr. Desmond Lin a Business Development Director of Vietjet, in his address at the event stated that “Vinh International Airport boasts excellent facilities and an attractive, modern design that will facilitate growing transportation demands for Nghe.”

“Vietjet intends increasing its routes in the future to boost the frequency of existing flights to Vinh City to meet its increasing travel demands. Our HCMC-Vinh connection has already facilitated tourism and trade growth between both destinations. Meanwhile, we are delighted to have flown 10 million passengers and look forward to flying millions more in coming years.”

With a fleet of 20 Airbus and 320 aircraft, Vietjet now operates 150 flights per day, transporting ten million passengers on approximately 60,000 flights in just over three years.

Now operating 28 routes both local and international across the country and the region, it flies from Vietnam to Singapore, Thailand, South Korea, Taiwan, and Cambodia. With an active plan in progress, the airline wishes to expand its international flight network across the Asia Pacific region and beyond.