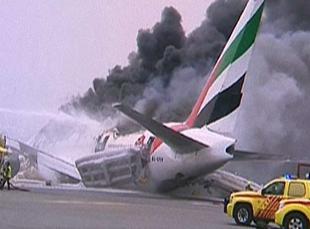 Dubai: On earlier on Wednesday, one firefighter was killed while he was trying to stop from burning caused by a plane crash-landing.

Xinhua news agency reported, when Sheikh Ahmed Bin Saeed Al-Maktoum, the Chairman of Emirates Airline, confirmed that the firefighter lost his life in the rescue operations.

A Boeing 777 of Emirates Airline, flying from Thiruvananthapuram to Dubai, made an emergency landing at 12.45 local time (0845 GMT) at Dubai International Airport.

In a video message, Sheikh Ahmed said a fire on the plane, which was reportedly delivered to Emirates in March 2003, was put out at 14.32 local time (1032 GMT).

Altogether 300 people, including 18 crew members, were on board, all of whom are reported safe.

Total passenger was 282 come from 20 countries, out off total passenger 224 from India, 24 from Britain and 11 from the UAE, the Emirates said.

Sheikh Ahmed said, investigations are still ongoing, stressing “all required maintenance and security checks on the plane were done in the past as scheduled”. “Our priority is now the health and safety of our passengers,” he added. The airport has restart departure flights at 18.30 local time (1430 GMT).

All Emirates flights and foreign airliners had to be delayed or completely cancelled, while some flights coming to Dubai International were diverted to Dubai’s second air hub, Al Maktoum International Airport.