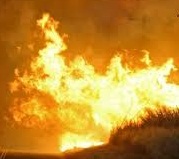 The California Department of Forestry and Fire Protection said on Wednesday. Fore in the California is a result of copper wire which is poorly connected to hot tub.

It is recorded as third most vicious wildfire in California’s history, which killed four people and destroyed more than 1,300 homes and buildings. Fire blow from rudely wired hot tub, state fire officials on Wednesday.

The California Department of Forestry and Fire Protection said on Wednesday, fire started after copper wire poorly connected to hot tub it raises temperature at 1,981 degrees melted and set on fire dry brush that was nearby at a home in the town of Cobb.

According to a report posted online and filed with local prosecutors, homeowner and primary resident John Pinch admitted to investigators that he had installed the circuit that caused the fire. It was not clear whether charges would be filed against Pinch, who was not immediately available for comment.