News
In China Typhoon Megi causes landslide, over 15 were rescued, at least 32 missing 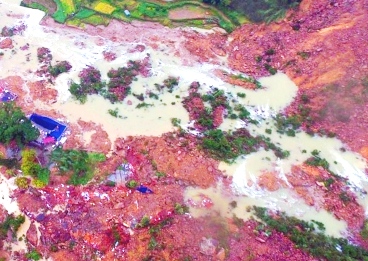 Typhoon Megi brought heavy downpour and tragic landslide in the Village of China Sucun in the Suichang County, where 15 people have been rescued and 26 are still missing and submerge Zhejiang village in the eastern region of the China.

On Wednesday, state run Xinhua news agency reported many houses in the village submerge which place at the 37km from country and destroyed parts shattered everywhere. 15 people were rescued and 26 still missing.

In China since landslide made which killed one man on Tuesday, Rescuer took out one man and pregnant women alive from debris.

The country told to Xinhua, women is out of danger and injury is constant leg fracture but not life taking. Official said on yesterday, it is difficult of say exact figure of the missing persons.

Sun Jingmiao, Vice Governor of the China is heading the rescue mission; more than 400 rescuers are placed on the site and Zhejiang. More than 18,000 people have been moved to safe places in the region.

Flood level in the Pingyang County in Zhejiang cross the level schools and power stations flooded in the water. Power cut carried out in the Shuitou Township which is of 170,000 people. The local education bureau said, schools in the country were remaining closed.

Early yesterday, Typhoon Megi did landslide in the Quanzhou City, Hui’an County, Fujian area of east china. The speed of the wind over 118 km per hour recorded, according to meteorological authorities.

This is 17th big Typhoon the China brought heavy rain in coastal areas. It has killed 4 people and 268 people wounded in Taiwan on Tuesdday.