Jordan’s Prime Minister has categorically stated how “despicable” and inhumane it is for the Islamic State militants to threaten in a released video, the killing of a Jordanian pilot and a Japanese journalist within 24-hours on Jordan’s failure to free suicide bomber Sajida al-Rishawi.

Both hostages were captured late last year. Kenji Goto, a Japanese journalist was captured by ISIS in October and Muadh al-Kasasbeh a Jordan pilot was captured late December when his aircraft crashed in Eastern Syria. The purported message of the video which was more of a threat with an ultimatum demanded the release of an alleged suicide bomber placed on death row in Jordan, for her role in the 2005 bombings in three hotels in the country killing 57 people and injuring 90 others. 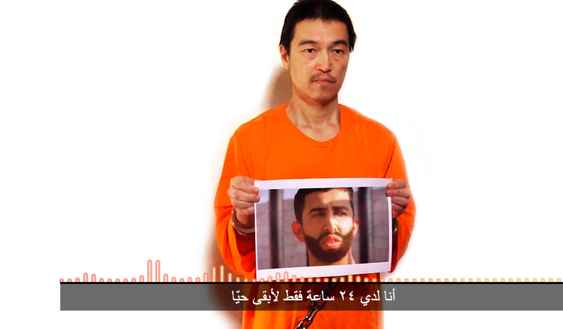 One of the hostages, Kenji Goto has spoken in clear terms that in less than 24 hours today, he and his colleague Muadh al-Kasasbeh will have to face death as the final sentence by ISIS should Japan and Jordan fail to comply.

Kenji Goto in a few days had in another audio announced the killing of one of his friends Haruna Yukawa, who had also been held captive by the Islamic State after Japan’s failure in making payment of a ransom of $200 million to ISIS within a stipulated deadline.

Prime ministers of both countries are currently working together towards the release of these two hostages. – Prime Minister Shinzo Abe had indicated.

“This was an extremely despicable act and we feel strong indignation. We strongly condemn that,” he said. “While this is a tough situation, we remain unchanged in our stance of seeking help from the Jordanian government in securing the early release of Mr Goto.”

The Guardian, a British National Daily News paper has indicated that any attempt by Japan or Jordan to comply with IS terms will infuriate the US, which strongly opposes prisoner swap and ransom payment to terrorists.

A correspondent from BBC Tokyo, Rupert Wingfield-Hayes has stated that “regardless of Mr. Abe’s promise to ensure the release of Kenji Goto, it’s pretty clear that the power to effect this change lies with Amman and not Tokyo”