World
Kenji Goto is telling the stories of common people

Kenji Goto used to be a well-known figure in Japan with a status for reporting from places that most people would normally have stayed away from.

His primary focus was on war and the impact it was having on his people and he was a trusting face to journalists who reported from Syria on the inside. Many socialized with him at coffee shops and cafes in Gaziantep and Antakya, just on the Turkish border while discussing their trips to the inside of the country.

He wrote books about Africa and the AIDS epidemic and went on assignment for a great deal of the main broadcasters of Japan to places such Somalia, Afghanistan, Iraq, and all over Asia and Africa. His primary goal was to report about positive and uplifting stories to help keep citizen’s minds off of all the negativity. 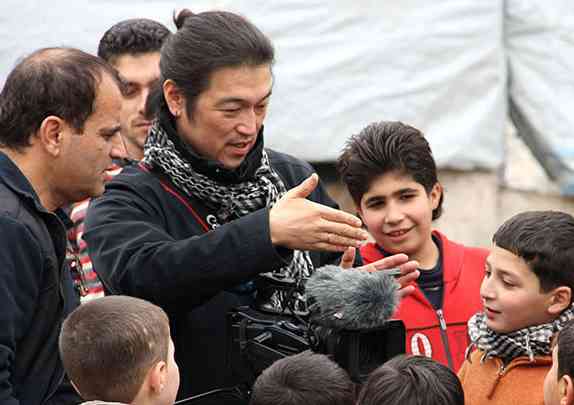 Mr. Goto was on a mission to help free his comrade Haruna Yukawa, when he was abducted and kidnapped last year. His friend had been picked up in Iraq by the Islamic State.

Goto explained how Yukawa and become friends with certain members from the Free Syrian Army, who were currently fighting in Syria, and they did trust him due to his ability to be so un-soldierly. They even provided him shelter and foods in their refugee camps.

After they had crossed the border into Syria from Turkey in the month of October, Goto who is 47 years old with a wife and three children, taped a message via video on a mobile phone borrowed from his Turkish assistant.

He said the following: “If something happens, all the responsibility is on me. It’s pretty dangerous…please don’t have a bad impression of the Syrian people.” He also said that he would definitely come back alive. He was trying to bring comfort to those who knew him with those words.

To those who knew him, this sounded nothing liked Goto, as they knew him as a kind and gentle being.