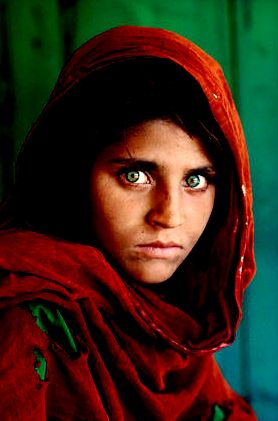 FIA sources said, she was detained from her home for acquiring fake Identity Card (CNIC). Bibi has dual nationality Pakistani and Afghan, both the ID’s have recovered from her, Dawn online reported.

The officer who helped to issue ID card to Bibi, in past he was working as a deputy commissioner in customs and he got bail before arrest to avoid arrest in the case.

National Database and Registration Authority (Nadra) issued three CNICs to Bibi last year and two men who claim to be her sons. . Issuance of CNICs was against the rule regulations of Nadra.

The official said, currently those who lived on the address refuse to identify two person listed as her son in the form.

Inquire has been started with Nadra officials for issuing CNICs to foreign nationals by ignoring lawful documentation, Dawn online noted.

Sharbat Bibi is got popularly known as ‘Afghan Girl’ when National Geographic photographer Steve McCurry captured her image at the Nasir Bagh refugee camp which is placed on the edge of Peshawar in year 1984 and she getting known by Sharbat Gula.

She publically popular globally when her photo was  printed over cover of June 1984 issue of National Geographic Magazine that time she was just 12 year old.

She remained unknown for several years after her first photo cover magazine again she was discovered by National Geographic in 2002.