The Sony India has introduced the latest Android-based technology with the LED Television Set now in India. The Sony has done some new experiments with this device and presents the world’s one of smart and the slimmest 4K LED TV in the Indian market. 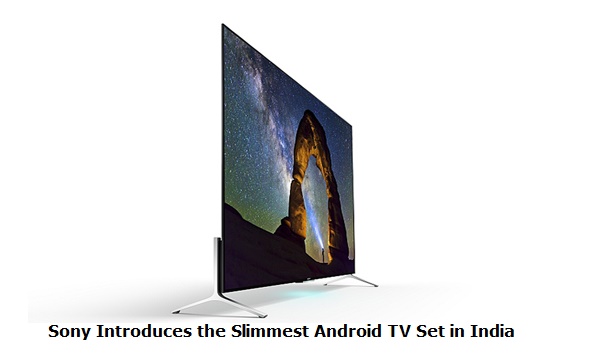 This television set consist of features like it has the wide range of UHD, one of Slimmest TV having the thickness of 4.9mm, great audio system, and the clearest video display. This new model is available in the range of 43-inch to 75-inch and also involve the new brand five series with 13 new models of television starting just for Rs. 69,900 for the 43-inch model in full HD LED TV.

Some additional feature that the Sony has been added that are this device also support the Android technology and can run the official Google Android TV software having the version 5.0. Not just single TV software it also offers a several TV apps from the Google Play Store.

Sony says it is the first Smart TV accessible in the Indian market that features to Android TV. This device supports the Google attributes such as Google Play Store, Google Chrome Cast like streaming, Voice Search, and connectivity to various accessories.

This model also offers Serial Catch-up TV apps, as well as it will provide you the notifications option from the Notify Bravia app from the Android TVs and SmartPhone.

TV display screen has the 4K i.e. 3840×2160 pixels resolution. It includes the Triluminos display technology to produce the accurate and sensuous shades of red, aqua blue and green that boosts the 4K processor to empower the advanced clarity, color contrast and accuracy.

With the backing of advanced technology up-scaling algorithm, the device monitors the non 4K content and scale up its resolution to 4K. Thus, Sony India is hoping that the product will drive the market crazy in India.