Travelers in search of spring savings need look no further than Southwest Airlines. The airline that boasts that they “invented the low fare” announced this month that they are offering several airfare “steals” on major routes throughout the US. Southwest Airlines has March 2015 rates as low as $73 one-way on some routes. Low fare searchers can travel cross-country from San Diego, CA to Washington, DC for only $177 one-way, which is a saving of over $100 round-trip. While these rates are amazingly low, there are several rules that apply. Buyers need to book travel at least 14-days in advance. The lowest rates are limited to select markets, and there are exclusions and restrictions that make tickets nonrefundable. 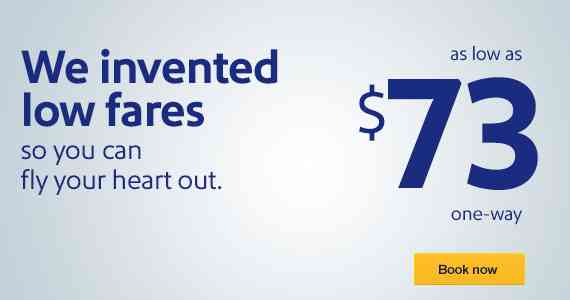 Additional fees should not be levied toward ticket changes made at least ten minutes prior to the scheduled flight departure according to the airline website. Travelers hoping to take advantage of these deals need to book by April 6th for ticket dates between March 31st and June 3rd. For those who have already purchased their airfare through Southwest, previously purchased tickets can be applied toward future travel at the discounted rates.

For travelers hoping to plan for their Spring Break getaway, remember that these rates are very discounted, but fees like these won’t last forever, seats and days are limited. Fares are not the same to every destination and travel is only available for one-way “Wanna Get Away® Fares.”