Indian consumers nowadays are inclining more on the luxury and huge vehicles for commuting. People in India mostly believe that owning a car is a status symbol due to which their preference is slightly shifting towards those royal cars with long body and high power.

One of the most loved and popular vehicle is the totally refreshed InnovaCrysta, especially in India. The craze for MPVs in India cannot be explained in words as the booking figures for the vehicles does the talking. On the occasion of one year anniversary, Toyota has planned to introduce a new model of InnovaCrysta Touring Sport on May 4, 2017. The vehicle is already available in Indonesia with name Venturer. 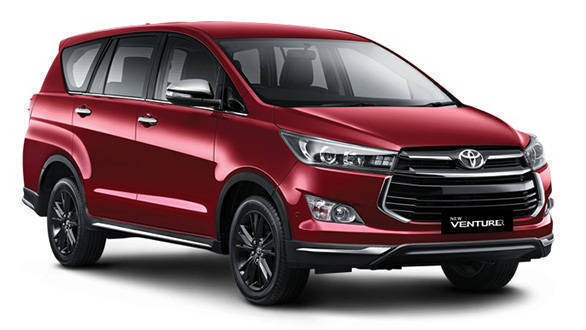 The new Touring sport variant comes with some cosmetic upgrades and some minor changes over the previous model. Well, there aren’t many details about this variant but based on some reliable sources, it will be launched in new wine red color. The updates such as side skirts, wheel arches, and cladded bumpers are inspired by the crossover. The wheel arrangement remains the same as of previous excluding the alloys that will be in black. From the front, the grille now comes with more shiny chrome.

The interior and cabin of the Touring Sport will remain alike to the ZX variant. The internal feature comprise of a TFT multi-information display, touchscreen enabled infotainment system, and all the other features that appear in the top model. The New Toyota InnovaCrysta Touring Sport will have only 6-seat capacity that will be crafted with black leather. The floor mats will also have a badge of touring sport on it.

Post launch, Toyota InnovaCrysta Touring Sport might come out as tough competitor for Tata Hexa Tuff. The price is expected to be around Rs 70,000–80,000 over the regular ZX trim.