The heavy snow that has fallen has shut down many schools, the airport in Manchester, wreaked havoc on the railway systems, and stopped traffic dead in its tracks in the northwest. Scotland reported 29 schools and daycares closed in Highlands and 22 in Galloway and Dumfries, and 130 or more schools closed down across northern portions of Ireland.

The authorities in Cumbria shut down 34 schools, more than half of them in the Carlisle region. Oldham had twenty schools closed, as well as in Greater Manchester, and in Rossendale there were 13 schools were reported school closings. The massive number of primary schools and many of the secondary schools were shut down as well as the cross Pennine routes were severely impacted. 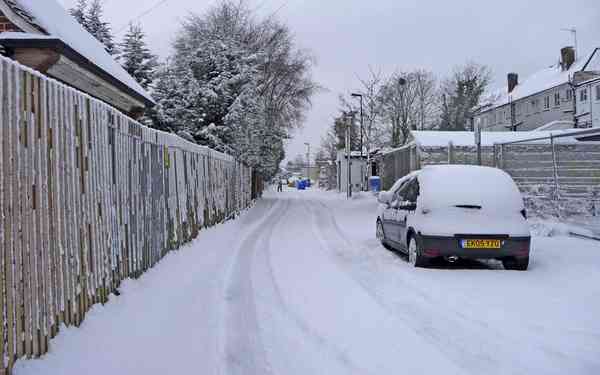 Many tram systems were shut down cars that had been abandoned blocked roadways and caused dangerous driving conditions. One of the busiest airports in Manchester staff fought to rid the walkways of snow with nothing but snow shovels while flights were continuously getting cancelled and delayed.

The heaviest snow fell in northern England, Ireland, and parts of Scotland according to the Met Office. Many of these areas saw heavy snowfalls up to 23cm or more. Derek McKay who made an appearance on Good Morning Scotland said that over 180 road gritters had been sent out during the night hours.

Northern Ireland saw more than 15cm of snow and had sent 120 gritters out to continue salting to roads in attempt to better the conditions.

There was a woman found missing after she was being searched for over three hours in heavy blizzard conditions in the area of Innerleithen area of the borders around Scotland. Eventually she had been found unconscious by a dog with search and rescue capabilities.

Rail services shut down between the cities of York and Manchester but the First TransPennine Express said that it was planning on running as many of the trains as they possibly could.

There was a missing fishing boat with members on board that helicopter and lifeboat crews could no longer search for due to the hazardous conditions.

Medical professionals are urging people to stay as warm as they can and not to put themselves at risk of danger.